Footprints in the Snow

No, I'm not trying to put a new take on the famous footprints poem. I love that poem. I have read it many times and shared it with many people. The footprints in the snow I am thinking of are the ones I saw as I went for my early morning walk today.

It started with the footprints leading through last night's snow, right up to my door. They tell about a young woman who came in late from a long day in Ottawa, wide spread deep footprints because she does not walk if she can run.

I wandered out on to the road side and there along the ditch were large dog-like footprints but no master's boot prints along side. They trailed the road side a while and then headed off into a field. Likely a coyote out for a midnight stroll.

There were dozens of footprints along the corner to a side street. Although the children were already gone, I could imagine them waiting in the -12 celsius cold for a bus.

Along one of the driveways there were clear footprints leading to a home. Big boots. Some night worker dropped off from a job, eager to go inside to bed. And on the other side of the same driveway, car tracks and high heel prints coming from the house. Wife on her way to work.

I focused for my whole walk on the different signs of who had been there and I thought about it. Just as our footprints leave evidence for others of what has been, our words and our actions hang in the air as well.


In the Book of Samuel in the Bible, Samuel is told by God to anoint a king. He judges by what his eye sees, but God knows the truth. He sees the heart.


God knew that David's brothers were not the men He wanted for king. He could see the heart.

As we go through life, we leave 'footprints'. God sees them and others do too. People can tell who we really are by the kind of prints we leave behind.  Are we kind? Do we cover up sin? Do we treat others with respect? Do we care about others needs? Do we put God first?  We leave a 'footprint' with each person we come into contact with. We leave an even bigger footprint with God because He knows our hearts.

Pay a little more attention to what you leave behind. Someone else is reading it. 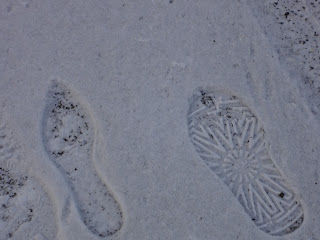 The Gift That Kept on Giving

I woke up early this morning. The time change was still having its effects and the alarm clock read 5:00 which meant no one was up and about and there was no real reason to get out of bed. In my still sleepy state, I found myself softly singing the words to an old hymn from my childhood.


There’s a peace in my heart that the world never gave,
A peace it cannot take away;
Though the trials of life may surround like a cloud,
I’ve a peace that has come here to stay!

All the world seemed to sing of a Savior and King,
When peace sweetly came to my heart;
Troubles all fled away and my night turned to day,
Blessed Jesus, how glorious Thou art!

This treasure I have in a temple of clay,
While here on His footstool I roam;
But He’s coming to take me some glorious day,
Over there to my heavenly home!

All my life I have been singing. In the back of my mind as I go about my daily living there is always a song, words to a hymn, scripture in song, verses to some chorus. As I lay in the semi-darkness this morning, my thoughts drifted back to my childhood home.

I was blessed with parents who loved to sing. Sunday mornings we were often awakened to the sound of my Dad playing harmonica as he got ready for church. If I went out into the hall, I could see him sitting on the side of the bed, eyes closed, harmonica pressed to his lips. He whistled or sang while he worked about the farm and later he bought himself a record player. That opened up a whole new world. We would drive around the country side attending concerts and services that featured gospel singers and always he would buy the records. Evenings after work, he would play them and hearing them over and over, we would soon know them all by heart.

My mother's tastes leaned more to the hymns in the Psalter hymnal and she sang them while we did dishes with her, and while she gardened, while she comforted the foster babies, and while she ironed our clothes.

I learned to read long before I started school by following my father's finger in the hymnals at church.

They simply lived their lives and praised the God they loved. It was not complicated, only sincere and from the heart, an outward expression of an inward work that God had done in their lives.

It was a gift that keeps on giving. What a legacy they left us all.

So if my children wonder why I always sing as I go about my day, if they get tired of hearing the raspy sound of my voice as I do dishes, or my Randy Travis Gospel CD echoing through the house, I hope they will someday  look back and remember and the gift will continue on.

Fall is lingering this year. Today it is a bit cool but it has been lovely. The trees were so beautiful this year, all shades of gold and green and glorious red. We had a small wind storm last week that wandered off the edges of hurricane Sandy and suddenly all the leaves were gone. Looking out in my back yard, I see gray against a cold sky and the neighbor's houses are visible once more through the trees.

Blogging is not laying heavy on my mind this afternoon. Instead I am cleaning cupboards and thinking about all the clocks I have to change tonight. Nevertheless, here are some pictures I wanted to share with you....and a scripture.


"but I have trusted in Thy lovingkindness. My heart shall rejoice in Thy salvation. I will sing unto the Lord because He has dealt bountifully with me."
Posted by anita at 2:13 PM No comments: